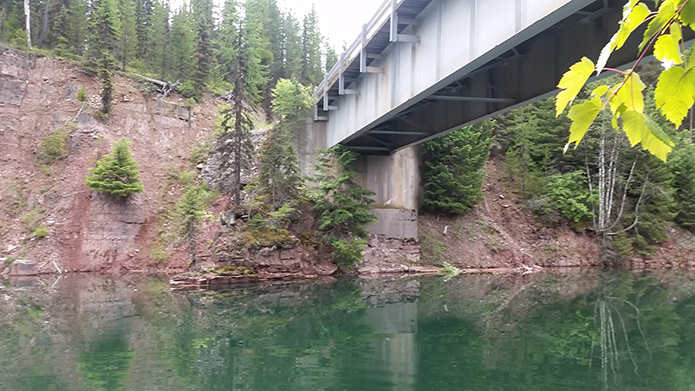 As part of their IDIQ contract with the USFS Region One, AESI provided engineering and surveying services for the repair of the Sullivan Bridge gabion abutment on the north side of the east abutment of the bridge.

Sullivan Bridge is located on National Forest System Road 895 in a remote area on Hungry Horse Reservoir. An initial site visit was conducted in July 2016 by AESI and the Forest Service. Following the field visit, it was decided that the failing gabions should be removed, the slope re-shaped and protected to minimize erosion and channelization, and an engineered toe should be built and backfilled with riprap up to the existing road shoulder. All survey, evaluation, and construction needed to consider steep slopes and cliffs inaccessible to most equipment.

The site was surveyed with a combination of high definition scanning, bathymetric surveys with GPS integrated depth finder, and conventional survey and GPS.   Several different design and construction options including barge access, long reach excavators, and specialty drilling and anchoring equipment, and techniques were then considered and discussed by AESI and the Forest Service.  The preferred alternative included removing the existing gabion baskets entirely and replacing with a stacked riprap fill slope.    Because the catch point is a thin section of steep bedrock, the toe of the riprap is supported by gabion reno mattresses anchored into the rock with driven rebar pins.  These pins and mattresses help to buttress the bottom of the riprap slope along with providing some vertical clearance between the bottom of the rock and the existing bedrock catch point.  Construction documents were developed in September 2016 including plans, engineer’s opinion of probable construction cost, supplemental specifications, and schedule of items.  A report was also prepared to summarize the design process and describe how and why the final design was chosen.